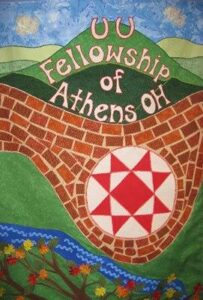 The Unitarian Fellowship of Athens was founded on February 9, 1958, when 27 area residents subscribed to its bylaws. The purpose of the Fellowship, in keeping with Unitarian traditions and principles, was to stimulate interest in liberal religion, to cultivate an atmosphere for freedom of belief and to provide opportunities for liberal religious thought, action and education. In 1961 the national Unitarian Association merged with the Universalists, and in 2004 the Athens Fellowship followed suit, making its name the Unitarian Universalist Fellowship of Athens (UUFA).

Formation of fellowship was sparked by Race Street neighbors, Walter Wright and Milton Ploghoft, who had Unitarian roots in other states. The UFA was granted a charter on March 5, 1958, by the national headquarters. In its first 47 years, a total of 378 persons signed the formal membership book and many more have attended services or activities. The Fellowship is a welcoming congregation in which people of all beliefs, races, ethnicities, and sexual orientations are invited to participate to the extent of their interests.

The Fellowship led a nomadic life until 1969, meeting first in the old Hillel House on University Terrace, then moving on, in order, to the old Music Building (now Gordy Hall), a church on the Hocking Street property of members James and Harriet Tong, the old Beacon School when it was on Terrace Drive just off Columbus Road, West Elementary School, and the Seventh Day Adventist Church. By the late ’60s, plans were under way to build on the present property, 184 Longview Heights Road. The first services were held in Fellowship Hall on October 12, 1969, fewer than 8 months after ground was broken for the building.

The Fellowship Building was designed and engineered by artists, engineers, and craftspeople of the Fellowship. The work of brick sculptor John Spofforth is most recognizable in the distinctive exterior and the columbarium in front of the building. Engineers William Beale and Charles Overby oversaw the building’s structure as well as the heating and plumbing systems, and artist Cliff McCarthy was most responsible for the interior design. Front doors by artist Robert Borchard greet members and friends. The building was accomplished mainly by the volunteer labor of members, families and friends. It was not unusual for 20-30 workers of all ages to turn out on weekends. The flooring came from the old Women’s Gym at Ohio University and glass from the Fenton Factory was used in the round windows, recycling resources from the region.

The striking Fellowship Hall has hosted many weddings, memorial services, and community events, including meetings, theater, and dance. The grounds also include a Grove for outdoor services, picnics and other activities. The Hall was home to the Hocking Valley Day School for 30 years.

The Fellowship held lay-led services for its first 35 years. Sunday programs often showcased community projects and personalities, as well as guest speakers from Athens and beyond, providing a liberal religious service and discussion welcoming to all. Beginning in 1993, the group began to have quarter-time ministers who presented services once a month and provided other ministerial services. The first such minister was the Rev. John Morgan, who had provided services to small congregations in the Ohio Meadville District. Others have been the Rev. Barbara Cooke of Columbus in 1994, the Rev. Don Rollins of Oak Hill from 1995 to 1999; and native West Virginian, the Rev. Dr. Rose Edington, who lived in Athens during her 2000-02 tenure. All have gone on to retirement or to larger congregations. From Fall 2003 to Spring 2006 the fellowship hosted one of our own, quarter-time student minister and Glouster resident, Evan Young. In the spring of 2006, Evan received his Unitarian divinity degree at the Methodist Theological Seminary near Delaware. In 2013, Evan left our congregation in order to complete the UUMA fellowshipping process. Rev. Lynda Smith then served our congregation as minister from 2014 until 2016. From 2016 until June 2021, Rev. Rollins was in our pulpit as a quarter time contract minister.

Unitarians and Universalists have always been heretics. We are heretics because we want to choose our faith, not because we desire to be rebellious. Heresy in Greek means choice. During the first three centuries of the Christian church, believers could choose from a variety of tenets about Jesus. Among these was a belief that Jesus was an entity sent by God on a divine mission. Thus the word Unitarian developed, meaning the oneness of God. Another religious choice in the first three centuries of the Common Era (CE) was universal salvation. This was the belief that no person would be condemned by God to eternal damnation in a fiery pit. Thus a Universalist believed that all people will be saved. Christianity lost its element of choice in 325 CE when the Nicene Creed established the Trinity as dogma. For centuries thereafter, people who professed Unitarian or Universalist beliefs were persecuted.

This pattern remained true until the sixteenth century when the Protestant Reformation took hold in the remote mountains of Transylvania in eastern Europe. Here the first edict of religious toleration in history was declared in 1568 during the reign of the first and only Unitarian king, John Sigismund. Sigismund’s court preacher, Frances David, had successively converted from Catholicism to Lutheranism to Calvinism and finally to Unitarianism because he could find no biblical basis for the doctrine of the Trinity. Arguing that people should be allowed to choose among these faiths, he said, “We need not think alike to love alike”.

In sixteenth-century Transylvania, Unitarian congregations were established for the first time in history. These churches continue to preach the Unitarian message in present-day Romania. Like their heretic forebears from ancient times. these liberals could not see how the deification of a human being or the simple recitation of creeds could help them to live better lives. They said that we must follow Jesus, not worship him.

During the sixteenth and seventeenth centuries, Unitarianism appeared briefly in scattered locations. A Unitarian community in Rakow, Poland, flourished for a time, and a book called On the Errors of the Trinity by a Spaniard, Michael Servetus, was circulated throughout Europe. But persecution frequently followed these believers. The Polish Unitarians were completely suppressed, and Michael Servetus was burned at the stake.

Even where the harassment was not so extreme, people still opposed the idea of choice in matters of religious faith. In 1791, scientist and Unitarian minister Joseph Priestley had his laboratory burned and was hounded out of England. He fled to America where he established American Unitarian churches in the Philadelphia area.

Despite these European connections, Unitarianism as we know it in North America is not a foreign import. In fact, the origins of our faith began with some of the most historic congregations in Puritan New England where each town was required to establish a congregationally independent church that followed Calvinist doctrines. Initially these congregational churches offered no religious choice for their parishioners, but over time the strict doctrines of original sin and predestination began to mellow.

By the mid-1700s a group of evangelicals were calling for the revival of Puritan orthodoxy. They asserted their belief in humanity’s eternal bondage to sin. People who opposed the revival, believing in free human will and the loving benevolence of God, eventually became Unitarian. During the first four decades of the nineteenth century, hundreds of these original congregational churches fought over ideas about sin and salvation, and especially over the doctrine of the Trinity. Most of the churches split over these issues. In 1819, Unitarian minister William Ellery Channing delivered a sermon called Unitarian Christianity and helped to give the Unitarians a strong platform. Six years later the American Unitarian Association was organized in Boston, MA.

Universalism developed in America in at least three distinct geographical locations. The earliest preachers of the gospel of universal salvation appeared in what were later the Middle Atlantic and Southern states. By 1781, Elhanan Winchester had organized a Philadelphia congregation of Universal Baptists. among its members was Benjamin Rush, the famous physician and signer of the Declaration of Independence.

At about the same time, in the rural, interior sections of New England, a small number of itinerant preachers, among them Caleb Rich, began to disbelieve the strict Calvinist doctrines of eternal punishment. They discovered from their biblical studies the new revelation of God’s loving redemption of all. John Murray, an English preacher who immigrated in 1770, helped lead the first Universalist church in Gloucester, MA, in the battle to separate church and state.

From its beginnings, Universalism challenged its members to reach out and embrace people whom society often marginalized. The Gloucester church included a freed slave among its charter members, and the Universalists became the first denomination to ordain women to the ministry, beginning in 1863 with Olympia Brown.

Universalism was a more evangelical faith than Unitarianism. After officially organizing in 1793, the Universalists spread their faith across the eastern United States and Canada. Hosea Ballou became the denomination’s greatest leader during the nineteenth century, and he and his followers, including Nathaniel Stacy, led the way in spreading their faith.

Other preachers followed the advice of Universalist publisher Horace Greeley and went West. One such person was Thomas Starr King, who is credited with defining the difference between Unitarians and Universalists: Universalists believe that God is too good to damn people, and the Unitarians believe that people are too good to be damned by God. The Universalists believed in a God who embraced everyone, and this eventually became central to their belief that lasting truth is found in all religions, and that dignity and worth is innate to all people regardless of sex, color, race, or class.

Growing out of this inclusive theology was a lasting impetus in both denominations to create a more just society. Both Unitarians and Universalists became active participants in many social justice movements in the nineteenth and twentieth centuries. Unitarian preacher Theodore Parker was a prominent abolitionist, defending fugitive slaves and offering support to American abolitionist John Brown.

Other reformers included Universalists such as Charles Spear who called for prison reform, and Clara Barton who went from Civil War “angel of the battlefield” to become the founder of the American Red Cross. Unitarians such as Dorothea Dix fought to “break the chains” of people incarcerated in mental hospitals, and Samuel Gridley Howe started schools for the blind. For the last two centuries, Unitarians and Universalists have been at the forefront of movements working to free people from whatever bonds may oppress them.

Two thousand years ago liberals were persecuted for seeking the freedom to make religious choices, but such freedom has become central to both Unitarianism and Universalism. As early as the 1830s, both groups were studying and promulgating texts from world religions other than Christianity. By the beginning of the twentieth century, humanists within both traditions advocated that people could be religious without believing in God. No one person, no one religion, can embrace all religious truths.

Today we are determined to continue to work for greater racial and cultural diversity. In 1977, a women and religion resolution was passed by the Association, and since then the denomination has responded to the feminist challenge to change sexist structures and language, especially with the publication of an inclusive hymnal. The denomination has affirmed the rights of bisexuals, gays, lesbians, and transgendered persons, including ordaining and settling gay and lesbian clergy in our congregations, and in 1996, affirmed same-sex marriage.

All these efforts reflect a modern understanding of universal salvation. Unitarian Universalism welcomes all to an expanding circle of understanding and choice in religious faith.

Our history has carried us from liberal Christian views about Jesus and human nature to a rich pluralism that includes theist and atheist, agnostic and humanist, pagan, Christian, Jew, and Buddhist. As our history continues to evolve and unfold, we invite you to join us by choosing our free faith.

Written by Mark W. Harris, a UU minister and former information director for the UUA.